Diving into the Pacific

It seems we never stop learning.

I recently had the privilege of participating in the First Pacific Islands Climate Forum.  It brought together island representatives from across the Pacific.  People from Europe and the Caribbean also came along to share experiences.  It was certainly an eye opening event.

I went to introduce an innovative project I am involved in called XDI (Cross Dimensional Impacts).  XDI combines infrastructure data (such as power, water, roads telecommunications and transport) and identifies where a failure in one system will disrupt other systems.  For example, imagine a pumping station overheating and drawing too much power. This may cause the failure of an adjacent power transformer, which may then disrupt telecommunications, and on it goes.  XDI looks for these points, and develops the business case for why investment in one system will build resilience across multiple systems.  We thought it would be a useful tool for Pacific island nations where systemic failures can influence the whole community and can be expensive to fix due to the remoteness and access to resources.

What struck me was the incredible diversity of the region. The region covers over one-third of the planet.  So a major climate driver, like this year’s El Niño, will have different impacts from place to place.  In the northern hemisphere and in the west of the southern hemisphere it is likely to be a far more active tropical cyclone season.  Towards Australia there will continue to be prolonged dry periods, extending the drought that is already causing so much strife.  It made me feel like I was tucked away in one corner of the world where the effects of major climate drivers, like ENSO, SAM and IOD, were relatively homogeneous across large parts of the country. 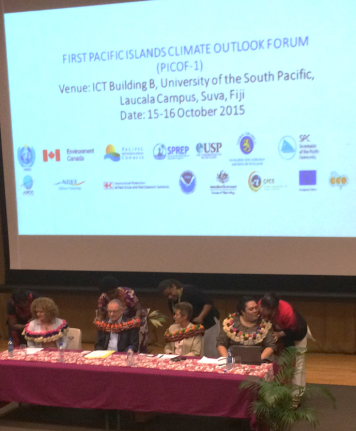 Despite their size and diversity, Pacific island nations recognise they have common interests and they work together and share resources.  They recognise that they are different, and in many ways unique, from other parts of the world and cooperation with each other will deliver the best results.

I was surprised by how little fresh water is used across the Pacific.  Atoll communities use about 50 litres per person per day. Compare that to Australia where the figure is over 250.  Despite the lower usage, there are many communities facing water shortages.  There are a number of programs seeking to address this such as the Pacific Water, Sanitation and Hygiene (WaSH) Coalition. There is a great deal of unused capacity in people’s roofs.  Improving a household’s ability to capture rainwater through gutter maintenance is a good idea. You can find more information here.

On a final note, the First Pacific Islands Climate Forum ran what could be described as an open microphone policy. Anyone could present their views.  This was because with a culture dominated by modesty and respect, people were unwilling to put themselves forward and had to be actively invited to participate.  I mused that such an approach would be a disaster in most of the conferences and events I normally attend.  I could only imagine the endless lines of people wanting to take control of the agenda and put forward their opinions.

I was grateful for the opportunity to spend a little time learning about the Pacific island nations. It reminded me to keep taking up opportunities and always be open to learning.  This is how we will find the innovative ideas that will help us deal with climate impacts.

My next big learning opportunity is the 21st Conference of Parties in Paris, or COP21 as it known.  Hopefully I will learn that the world is finally ready to take the steps necessary to seriously tackle climate change.