This is the original article prepared for the Local Government Association of South Australia Newsletter. The final version of the article can be found here. 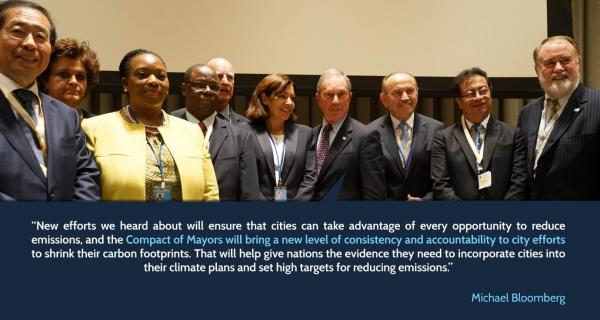 Climate Week NYC is a high profile event dealing with global climate policy. For the first time since 2009 the event coincided with a UN Summit on Climate Change where world leaders were set to announce their commitment to a global agreement by 2015.  If successful, this agreement will replace the Kyoto Protocol as the basis for countries to cut emissions and address climate impacts.

There were also announcements by states and provinces about their actions to reduce emissions, as well as over 100 large companies who joined forces to announce their investment to reduce the impact of their operations on the climate.

But the real story about Climate Week is the action at the local scale, and by far the most impacting of these was the action by Mayors around the globe.

The global Compact of Mayors

Local government is taking a leadership role in the climate change fight with a global Compact of Mayors, comprising initially of 2000 municipalities, promising to help make deep collective carbon cuts.

The Compact will enable cities to publically commit to deep GHG emissions reductions; make existing targets and plans public; and report on their progress annually. Through this effort, municipalities will be choosing to meet the same requirements proposed for the international climate negotiations that will lead to a global climate treaty in 2015.  Local emissions data will be collected through existing platforms and will be made publically available through ICLEI’s platform, the carbonn Climate Registry.

“Addressing climate change entails making our cities more knowledgeable about their own consumption and resilience. The Compact will contribute to that,” said Mayor Kadir Topbas of Istanbul and President of UCLG.

A powerful symbol of unity, the Compact is not just a huge step forward for municipalities, but also for nations. It not only demonstrates local commitment to helping nations set more ambitious, transparent and credible climate targets, it will encourage nations to recognise local commitments; establish better policies; and direct resources to municipalities to limit any further increase in global warming.

Existing municipal commitments could reduce annual emissions by 454 Megatons CO2e in 2020, achieving a total reduction of 13 Gigatons CO2e by 2050. As more Mayors sign up to the Compact, these numbers could be doubled, quadrupled or multiplied many times over.

A copy of the compact can be found here.