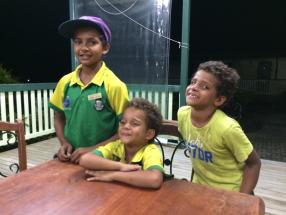 I am a big believer that adapting to climate change is a local issue.  Governments support the process with nationwide or provincial programs, but most of the actual work has to happen locally.  So what does this mean when you are working in remote island communities?

For the last twelve months I have been working with the communities in the Torres Strait.  Wedged between the top end of Australia and Papua New Guinea, it represents our country's only real border.  It is the one place where you can stand on one island in Australia and see another country just across the water.

Unlike the rest of us, these communities are being forced to deal with a problem they have had almost nothing to do with creating.  They are in the slow process of losing their reefs, landscapes and in severe cases, their whole island because of the climate changes we created.  They are Australians, but like all indigenous communities their presence in the region pre dates us by thousands of years.

These are truly unique island communities, formed by a combination of their own culture and western values and approaches.  Coconut Island, or Poruma as it is known locally, is an example of one such melding of cultures.  Modern houses are stretched along a single road with satellite dishes dotting the rooves and elaborate graves filling their front yards.  Important family members and community leaders are kept close, even in death. 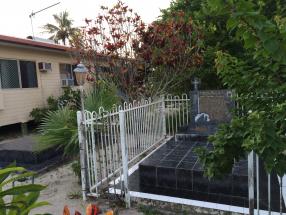 While everyone seems to have a mobile phone and are constantly in contact with friends and relatives elsewhere, they keep their lights on at night to help keep bad spirits at bay.  Deeply religious and spiritual, the dominant theme when we talk with them about the future is family.  It is all about family and culture in these communities.

While it has been surprising how many standard adaptation planning methodologies can be applied, we have had to tailor the approach to suit the culture and language of the community.  We have led the community through unique approaches to integrated vulnerability assessments and adaptation options assessments.  We have developed wholly new ways of doing adaptation pathways methodologies applying resilience principles, visioning and cascading consequences.  The key has been to identify the actions that they themselves can do, as well as actions where they need help from outside. 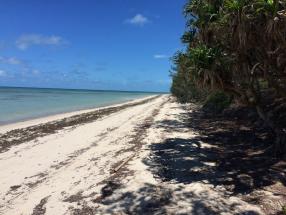 Here local solutions matter more than ever.  Despite the large amount of government services, the locals always understand that they are intimately connected to the sea that surrounds them.  We are working with them to articulate the many activities the community can do to respond to the changes and have a prosperous future.  Ideas that have emerged include local food production, increasing fishing industries and improved emergency management.  Coupled with large scale projects like a new sea wall, there is a lot going for Poruma and its people.

Like me, they are hopeful for their future, wanting to make the best life for their children and trying to find a way to make it all work.  I have been impressed by their respect for each other, spirituality and sense of place.  It’s a pity we have to travel so far to experience this sort of life in Australia.

The sun was setting as I left the island and headed back home. The blinding light reflecting off the calm waters that are slowly eating away at the island.  Perhaps expressing the tenacity that has held them to the region for millennia, they seek a way to preserve the best of the past, and embrace a new future.  In that, there are lessons for all of us.